The Well Master Fall Rate Calculator App was designed to make well optimization more efficient for field operators by providing an easy to use tool for calculating plunger fall rate. Fall rate can be defined as the rate at which a plunger is falling through gas and liquid in a specific well environment. This fall rate information can then be used to provide the minimum off-time for a specific plunger at your operating conditions. This will allow you to predict the time it will take for the tool to reach bottom.

Simply input your operating parameters, select a tool and calculate away! 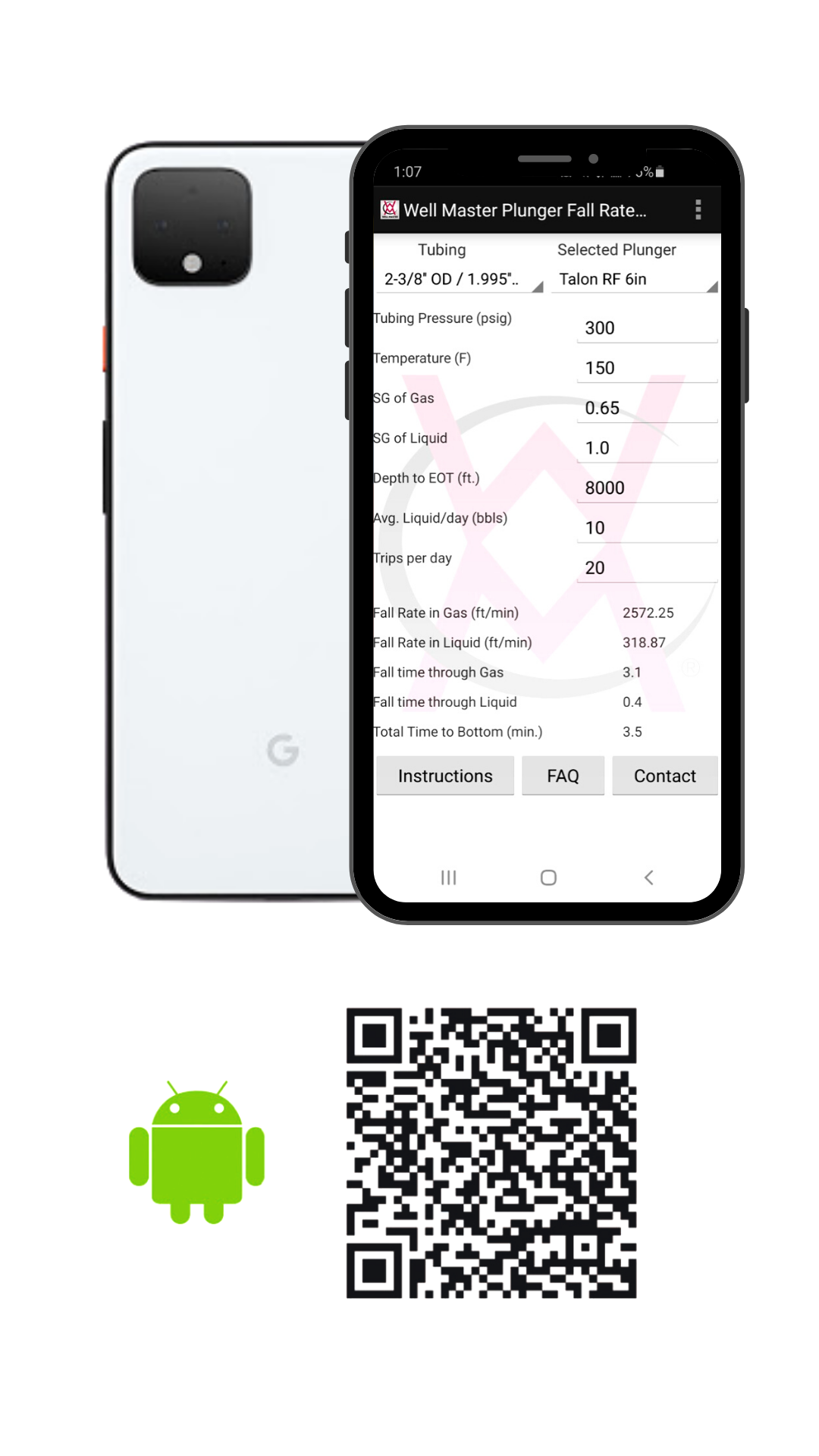 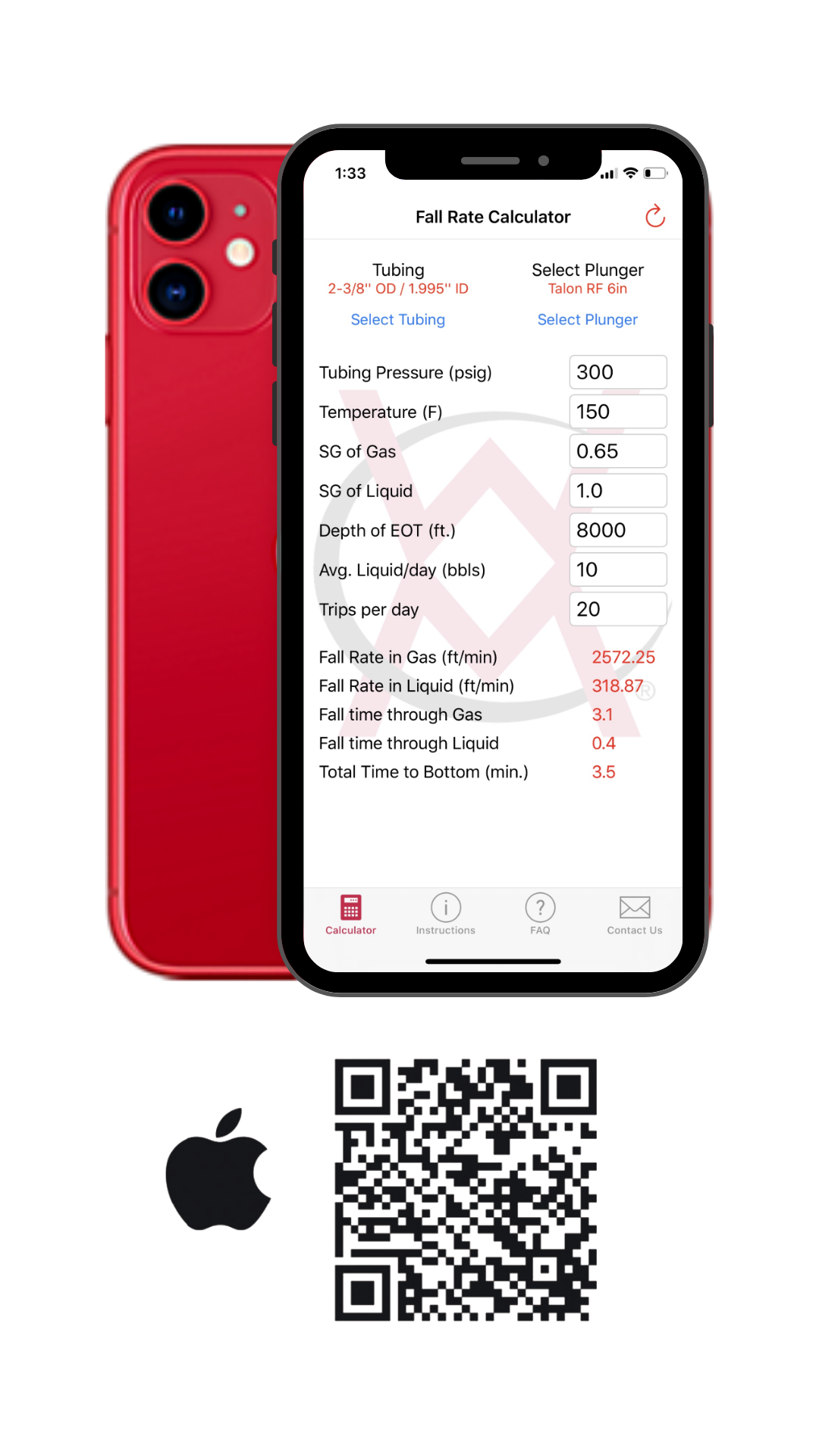 How accurate are the calculations?

As with any calculation, the output accuracy depends on input accuracy. Get the best input data available and remember that the tubing pressure should be an average pressure over the depth of the well. Wet wells tend to have higher pressure gradients and dryer wells less, but in all cases the downhole pressures will be higher than observed with surface measurement. When we are reasonably certain of the average tubing pressure, the calculated values are typically within about 15% of actual. We generally add about 10% to the calculated value when choosing this number for a minimum off time for control purposes.

How does the App get the calculated values?

The App calculates fall rates based on drag coefficients calculated for each plunger type using CFD (Computational Fluid Dynamics). The actual calculations have been adjusted to reflect real data gathered using an Echometer®.

Why does the App sometimes incorrectly estimate the fall time?

Fall times in gas are highly dependent on the average tubing pressure. If we input a surface reading and do not make allowance for increasing pressure at depth, the App will use the lower pressure input and calculate a faster fall speed than is actually occurring. Other factors such as obstructions, sand, scale, paraffin and different coefficients of friction due to different liquids are difficult to account for and will speed or slow the plunger in actual use. Remember that the App is intended to provide a much better guideline than historically used Rules of Thumb, but cannot be guaranteed to be perfectly accurate.

Fall times in liquid are much slower than in gas, so if the amount of liquid is incorrectly estimated, there will be a significant impact to the total time. Also, the App assumes all liquid is produced with the plunger arrival, therefore the plunger must fall through that liquid to get to bottom. If significant liquid is produced after plunger arrival, then the App will overestimate how much liquid the plunger falls through and provide a longer fall time than actual.

What if my well has a gassy liquid column?

Experiments using an Instrumented Plunger and an Echometer® demonstrated that the fall rate in a gassy column of liquid generally gave rates between that of gas-only and liquid-only columns. The total fall time was generally little changed by the composition of the column provided we were able to reasonably estimate the total liquid volume in the tubing.

Can I use the App for other types/manufacturer’s plungers?

Well Master makes no claims as to how representative this App will be in estimating fall rates of different styles of plungers not included in the App, including similar styles from different manufacturers. In general, however, the estimates for similar plungers (pad and solid for example) should be closer to actual than a fixed Rule of Thumb value.